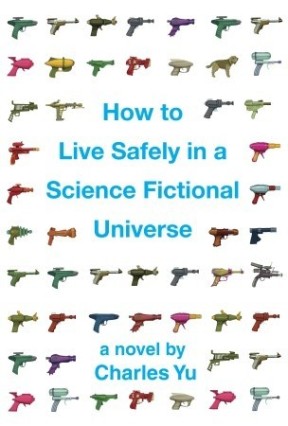 “Most people I know live their lives moving in a constant forward direction, the whole time looking backward.”

I love reading time travel books, but they often all end up blurring together in my mind. The plots are usually the same and the characters typically have the same motivations. But wow! This was completely different than what I’m used to.

In How to Live Safely in a Science Fictional Universe, Minor Universe 31 has people who get into time machines every day and try to do the one thing they should never do: change the past. That’s where Charles Yu (yes, the same name as the author!), time travel technician/part counselor, gadget repair man steps in. He helps save people from, well, themselves.

When he’s not taking client calls, he visits his mother who is stuck in a one-hour cycle of time and he searches for his father, who invented time travel and then mysteriously vanished.

Accompanied by TAMMY, an operating system with low self-esteem, and Ed, a nonexistent but ontologically valid dog, Charles sets out, and back, and beyond, in order to find the one day where he and his father can meet in memory. He learns that the key may be found in a book he got from his future self. It’s called How to Live Safely in a Science Fictional Universe, and he’s the author. And somewhere inside it is the information that could help him—in fact it may even save his life.

Whoa. What did I just read?! This book was like Inception on psychedelic drugs or Abed Nadir from Community took his love for all things meta to the next level.

I don’t think I’ve read something so high concept in a really long time. I’m going to be honest—this book was very confusing. I almost gave up in the beginning, but I’m really glad that I stuck it out.

The entire novel felt like an avant-garde art piece. The book mostly unfolds as a series of memories from Charles’ childhood and interlaced with his present search for his father.

These life vignettes we get to see explode into philosophical debates about what it means to be human. To my surprise, Yu (the author) manages to tie laser beams, quantum physics, and Han Solo together as a way to propel these philosophical discussions.

I thought time travel was a clever way to explore key moments of childhood, regrets of failed ambitions in life, and the loops people get trapped in.

So why the three bubble tea rating? As much as I was enthralled by this unique and crazy story, I found myself way too confused. And as someone who happens to revel in all things meta, I thought it was way too overdone in this book.

I actually rolled my eyes when Charles discovers the book and realizes it’s the key to everything. Everything after that point felt too much in service of this tongue-in-cheek “oh look at how clever I’m being” atmosphere.

I think this book has the potential to be a stunning movie or mini series on HBO. I truly was invested in Charles’ growth as a character and his search to find and understand his father. But in the end, I think the book suffered from being way too over the top with its meta references.

Give this a try if you love to read about time travel. And if you’re interested in Yu’s other work, I highly recommend Interior Chinatown. It’s also pretty meta, but easier to grasp without all the science fiction/fantasy jargon.