“There was a ceiling. Always had been, always would be. Even for him. Even for our hero, there were limits to the dream of assimilation, to how far any of you could make your way into the world of Black and White.”

When I found out Charles Yu was a writer on Westworld, I knew I had to pick this book up. While I haven’t continued watching past season one (I honestly think I don’t have the brain capacity to keep up with that show!), this book seemed like nothing that I’ve ever read before.

Willis Wu doesn’t perceive himself as a protagonist even in his own life. He’s just Generic Asian Man. Every day, he leaves his tiny room in a Chinatown SRO and enters the Golden Palace restaurant, where Black and White, a procedural cop show, is in perpetual production.

Here’s a bit player here too, but he dreams of being Kung Fu Guy — the highest aspiration he can imagine for a Chinatown denizen. Or is it?

After stumbling into the spotlight, Willis finds himself launched into a wider world than he’s ever known, discovering not only the secret history of Chinatown, but the buried legacy of his own family, and what that means for him, in today’s America. 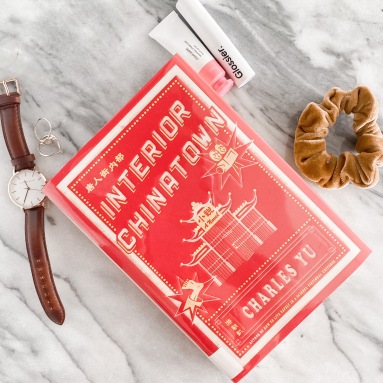 Whoa! What did I just read? I’m still processing my feelings about this book, but I think it’s got a solid spot on my favourites list of the year.

I’m not going to lie—I almost DNF’d it around the 30 page mark. I couldn’t pinpoint where the story was going, but I’m so happy I stuck with it.

Yu did such a wonderful job building a world that seems completely out of the realm of what we know, but then manages to slyly connect it to the world we live in.

Even though it’s all written as one big script (with the show in constant production), it’s still a story for our time, set in our time. Even when it has some wonderful elements of the fantastical.

It’s a playful but also heartfelt book that speaks to race, identity, pop culture, and the roles we’re forced to play in society because of what we look like or where we come from.

At first you might bristle at the use of Asian stereotypes and Hollywood tropes. I spent most of the book seething at the dialogue on the Black and White show. But every line Yu wrote felt painfully honest. I felt Willis’ despair as he felt like he was trapped in a prison of perceptions.

It especially killed me when Willis mentions he’s not even Chinese but continues to play these roles as scripted. But does it matter who he really is (he’s of Taiwanese descent like Yu) when his part to play is Generic Asian Man? After all, aren’t all Asians exactly the same? *Liz Lemon epic eye roll gif* 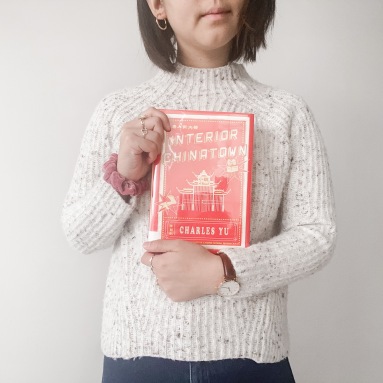 Regardless, these stereotypes were written masterfully into the story. And I could still empathize with these characters.

You see Willis’s ambition to make something of himself, and how he tries to climb the ladder despite being limited by what Western society allows him to be.

This is an incredibly clever, original, provocative, and hilarious book that I think people will enjoy.

Also, with Parasite’s recent sweep of the Oscars, I found this book to be more relevant than ever. This quote from the book even reminded me of a scene from Parasite:

As, everyone knows, water hates poor people. Given the opportunity, water will always find a way to make poor people miserable, typically at the worst time possible.

Interior Chinatown is a book that needs to be read and understood by everyone.

It’s definitely hard to get into and you have to get used to the writing style. But Yu did such an excellent job illustrating the need to fit in, to be someone bigger than what the world thinks you were meant to be, and how to treat people as humans and not stereotypes.