Because Internet: Understanding the New Rules of Language by Gretchen McCulloch

“Like the big collaborative projects of the internet, such as Wikipedia and Firefox, like the decentralized network of websites and machines that make up the internet itself, language is a network, a web. Language is the ultimate participatory democracy. To put it in technological terms, language is humanity’s most spectacular open source project.”

Ever judge a book by its cover? I’ve noticed that I tend to gravitate toward yellow books! This is my second yellow book this year about language. I clearly have a type!

In Because Internet, McCulloch explores how the internet is making our language change fast and in more interesting ways than ever before. Apps and platforms structure internet conversations, from the grammar of status updates to the protocols of comments and @replies. Social media is where we can watch language evolve in real time. Using stats, studies, and personal anecdotes, McCulloch explores the deep forces that shape human language and influence the way we communicate with one another. 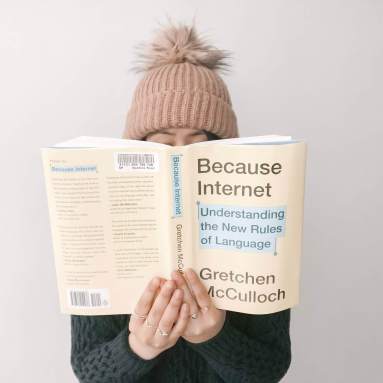 I originally suggested that we read this book at our work book club.

Sadly, we ended up going with another choice, but I’m so glad I read it on my own!

This was such an enjoyable read! I’ve always found language fascinating especially as we continue to see it evolve.

I’ve noticed my own language (typed and spoken) has changed based on what social platforms are popular at the time.

I didn’t expect to feel validated when I read this book. But I did once McCulloch dived into things like Tumblr-speak and presenting the argument that language is moving at lightning speed because of social media.

There are a ton of interesting tidbits that McCulloch presents throughout the book. But what I found most interesting was when she explained how your first social internet experience influences whether you prefer “LOL” or “lol.”

Breaking down each generation’s experience with internet, social media, and technology was fascinating. It shows in your preference for apps, platforms, and choice of slang. 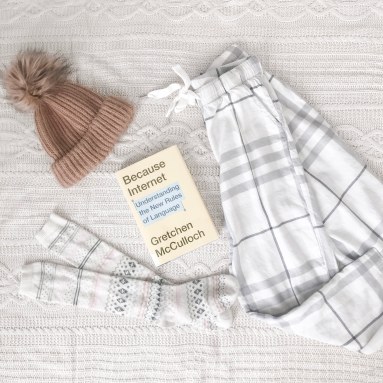 What McCulloch so artfully does is she brings humour and personality to every chapter.

She’s not simply presenting facts and studies. She’s also not regurgitating what you probably already know about social media and language. She brings personal stories to engage with the research.

There are genuinely such captivating insights into how quickly everything moves within online communities when it comes to language.

Memes and meme language can live and die within days.

Actually, I remember a time on Tumblr when someone created a spreadsheet and marked when a meme was created and when it was suddenly out of favour with users.

I would login to Tumblr a couple days later and I’ve already missed two memes that have already been used and thrown in the trash!

If you’re a heavy user of the internet or if you’re interested in learning about the intersection between language and the internet, I’d recommend this.

It’s wild to think that I just read a book explaining how emojis are like physical gestures, and the dissection of animal meme language. And it’s such a fun read! It makes me wish I took more linguistics classes in university!