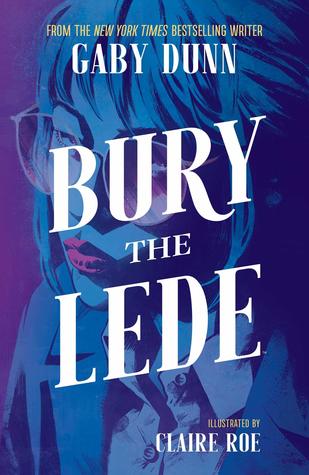 Bury the Lede by Gaby Dunn and Claire Roe

*ARC received by Netgalley in exchange for an honest review.

I’ve been closely following Gaby Dunn since she was at BuzzFeed along with Allison Raskin. I was a loyal viewer of their YouTube channel and occasionally tune in to their podcast. But I really wasn’t sure what to expect from this book, but I knew I had to read it because of the gorgeous cover.

Bury the Lede follows Madison T. Jackson who nabs a coveted night internship at Boston’s premiere newspaper, The Boston Lede. As an intern, she does most of the grunt work: doing whatever the senior reporters tell you to do, fetching coffee, and getting a quote from a grieving parent.

When the murder of a prominent Boston businessman comes up on the police scanner, madison races to be the first at the scene of the grisly crime. It’s there that Madison meets the woman who will change her life forever: prominent socialite Dahlia Kennedy, who is covered in blood and being arrested for the murder of her family. Dahlia refuses to talk to anyone that’s put in front of her until, with nothing to lose, Madison gets a chance and she’s unexpectedly thrown into danger.

I was very intrigued by this graphic novel and it held my attention for the first third of the book. But from there, it quickly all fell apart and I was only in it for the art style. But before we get there, let’s talk about what went wrong for me.

The plot (as you can see from above) sounds amazing. It sounds like a fast-paced mystery thriller. And I happen to enjoy reading books that are from the perspective of a journalist. Not only that, a young female journalist at that.

Unfortunately, we didn’t get to see Madison’s skills as a journalist. She simply stumbled onto her leads and did some very questionable things to obtain information. I’m still shocked that Madison roofied someone to gain access to police files and never faces punishment for it.

The plot was also very disjointed and hard to follow. I couldn’t keep the secondary characters straight because they’d appear randomly throughout the story out of context. I don’t know anything about Madison’s brother except that he’s constantly yelling at her. And his fiancé expresses her disappointment in Madison and that’s all we know about her.

In the end, the whole graphic novel felt rushed. And the loose strings all tied up nicely but very quickly.

As for the positives, there are definitely some in the book! The art style is fantastic. The colours are beautiful. The deep purple undertones added to the film noir setting. It also helped to add tension to the story. We knew when to be on edge by the colour transitions. 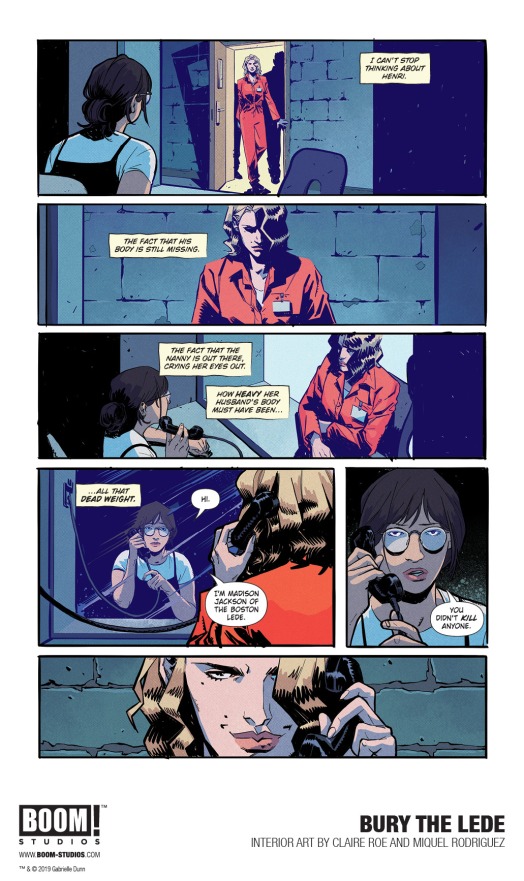 There is also some fantastic and subtle representation here. I feel like this is what all fiction should aspire to have. Characters who simply exist with their identities whether that’s ethnicity, sexuality, or gender. There was never a huge fuss over someone’s race or how someone identified.

Unfortunately, this missed the mark for me. I think there are plenty of other graphic novels out there that are worth your time. But I’ll be keeping an eye out for Roe’s work in the future!

1 thought on “Advance Review: Bury the Lede by Gaby Dunn and Claire Roe”