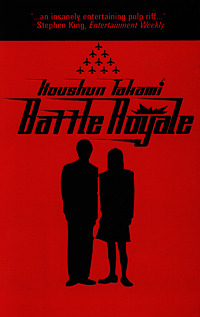 “By then she was dead. In fact, she may have been dead a while ago. Physically, several seconds ago, mentally, ages ago.”

Battle Royale and the manga its based on had a rabid fanbase way before I found out about it. Unfortunately, I only became aware of this book because of headlines and op-eds written about how Suzanne Collins blatantly plagiarized Battle Royale to write The Hunger Games. I’m not going to get into it, but having read both I have to say that you can definitely see that she drew inspiration from it. But labelling it as plagiarism is a bit of a stretch.

This was the second book I read for #AsianReadathon in honour of Asian Heritage Month. Battle Royale satisfied Challenge #4: Read a book by an Asian author that was originally written in their native language.

Battle Royale tells the story of a class of 42 junior high school students who are taken to a deserted island. They are forced to fight each other to the death in a program that’s run by the ruthless and authoritarian Japanese government. They are provided with various weapons and are forced to kill each other until only one survivor is left standing.

I have to say I enjoyed this much more than I thought I would. I knew it was going to be dark, but it was scarier and creepier than I thought it would be. I often found myself flinching when reading the description of how the students killed one another. It was ruthless as you would expect. You saw most of the students become shells of themselves. They became animals out for blood.

Part of the reason why I liked this so much was because it’s a psychological thriller. It goes into the deep and dark depths of the human mind. There’s no sugar coating or censoring anything that comes up.

Takami does a great job at creating an atmosphere and an environment. You feel like you’re right there with the students. You feel their confusion, their panic, and their spiral into insanity. Everything felt like there was a great sense of urgency with the collars programed to explode at any time, the time and geographic limit set on the students, and the fact that these kids all knew each other.

Depending on the skill of the author, having multiple narrators can be the downfall of a book. But not here. I enjoyed the multiple perspectives because you got to get into the minds of different types of people and their different reactions to things. It was a great juxtaposition to get into the mind of a goody two-shoes vs. the class bully. The frequent perspective change isn’t for everyone, but it definitely worked in this book’s favour.

Despite being a 4 bubble tea read, I still had some issues with it.

It was really hard to keep track of all the characters. You start with 42 students! And even though you start to realize that you only really need to care about a handful of students, I felt like I maybe should’ve read the manga to keep everyone straight in my head. I was getting students mixed up all the time.

I also took some issue with the translation. It was a bit rough. Sentences read as awkward and there were an excessive amount of ellipses used.  Some phrases became repetitive and you started to spot every time it was used, such as “That’s right.”

I’m a reader who appreciates good world building. At least for The Hunger Games, I knew exactly what the Capital looked like, why the government was running this cruel competition, and what each district had to suffer through. Unfortunately, I didn’t get that in Battle Royale. I can’t even tell you exactly what this imagined oppressive Japanese state looks like.

I would highly recommend this to anyone who loved The Hunger Games. It’s not quite an emotional read as THG, but I still really enjoyed this. Now I’m off to watch the movie!

“We’re more than the sum total of our choices, that all the paths we might have taken factor somehow into the math of our identity.” ⁣ ⁣ I think Blake Crouch is my favourite science fiction writer. His books read as a thriller and I can never put them down! ⁣ ⁣ #bookstagram #bookstagrammer #bookblogger #books #bookphotography #igreads #booklove #bookobsessed #blogger⁣
“I am a victim, I have no qualms with this word, only with the idea that it is all that I am.” ⁣ ⁣ I finished Know My Name yesterday and I still can’t stop thinking about Chanel Miller’s story as told by her. ⁣ ⁣ It’s an incredibly powerful book that everyone should read.⁣ ⁣ #bookstagram #bookstagrammer #bookblogger #books #igreads #bookishcanadians #instabook #booklove